On the morning of Wednesday, 17th February 2020, we woke up jovially and eager to start our journey to Nyeri. We began preparing our camping gear immediately after breakfast; time was on our side since we were to leave at 1300 hrs. We took the sleeping bags from the laundry and put them in the bus which was already parked behind the dining hall. We went for the utensils in Amboseli residence took them behind the Dining Hall where we washed them thoroughly and made sure they were spit and span before finally packing them. We then collaborated in carrying the 40 pieces of twenty litres bottles of water that we would be using during our camping, one at a time we moved the containers from the water tower to the parked bus. We then proceeded to the packing of foodstuffs like maize flour, wheat flour, milk, 15 trays of eggs each containing 30 eggs, rice and fruits. Some of us had the opportunity to enter the freezer room in the dining hall, where we picked meat. Before embarking on the journey, we were then divided into patrols of 6-8 scouts. In total we had six patrols with each boys patrol having a sister patrol, finally into the bus the journey begun, it was around 1400 hrs.

With our bellies full from the lunch meal, many took a much-needed nap, but I decided to take in the scenery along the road instead. The mood was hyped by the music, which echoed softly in the buses speakers. Three hours later, we arrived at the camping site, which was at the Nyeri Agricultural Show Ground. As we alighted the bus, each patrol was given a task, and there were many to do if we were to set up our sleeping quarters, cook our evening meal and eat before darkness engulfed us. 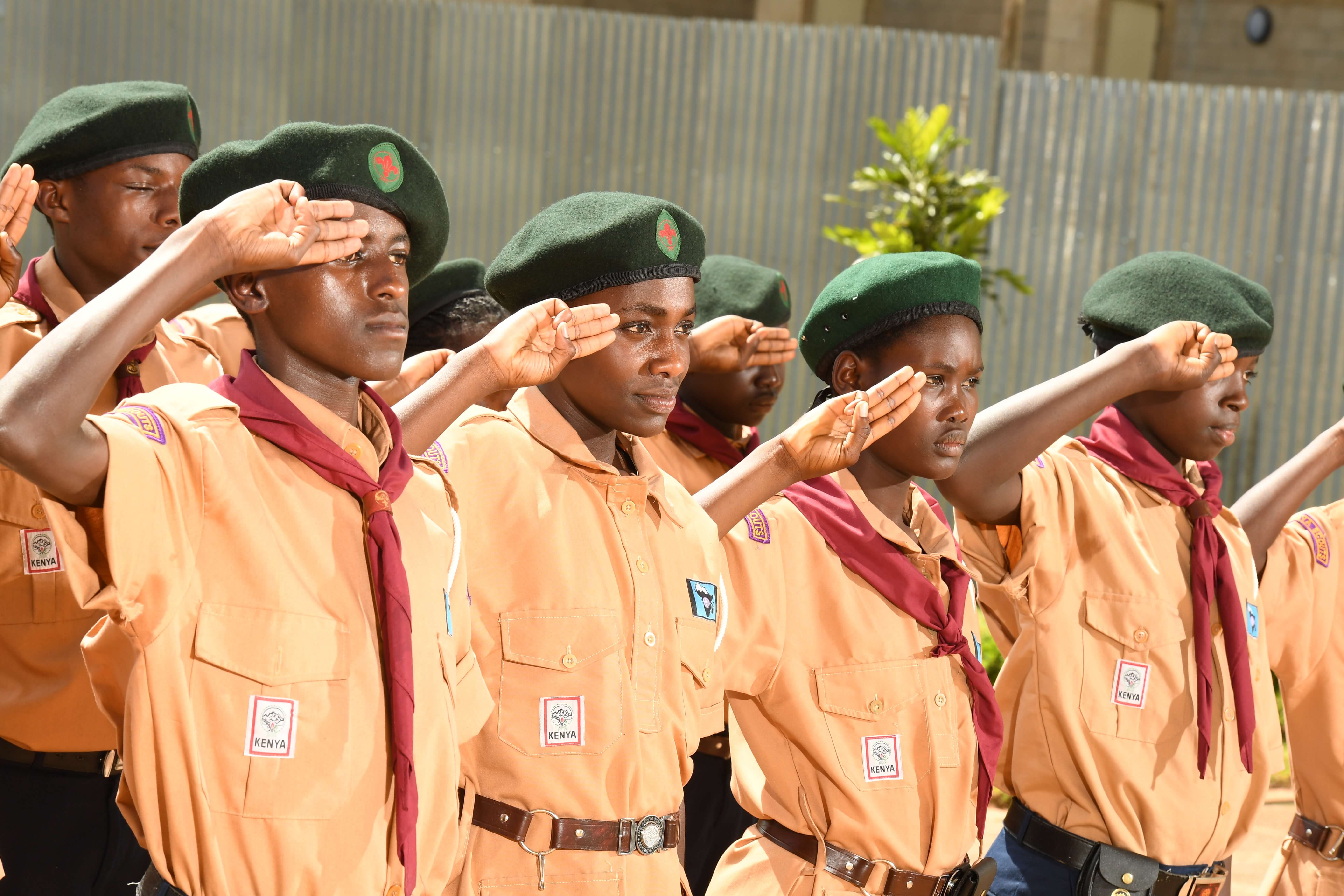 As the patrols were offloading the bus and pitching tents, Mr Odero and Mr Muthomi went to buy slashers which we used to clear the bushy camping site. To our delight, there was a watering point that was about 400 meters from our campsite, which allowed us to fetch water for our morning baths as well as washing our evening utensils. Being the first time that some of us had been tasked with cooking for a group, we had to endure partially raw ugly and hard chewy meat, but we took it in good stride as we learnt from our mistakes. We slept at around 12:30 am, and we were expected to wake up at 05:30hrs forthe morning run.

Being a light sleeper, my night was entertained by the snores of others as I tossed and turned, trying to find some semblance of sleep. Barely had I caught some rest and I had three whistles, it was already 0530 hrs, the jogging session was a damming task. After breakfast, we took our pens and books ready for the three classes of the day; the classes were; Investiture,

Mwanzo and Mwangaza. Classes went on until 1230 hrs, and we broke for the day. We used our afternoons to mingle with scouts from other schools, including some from as far as Wajir. That evening after dinner, we did some drills for about four hours.

Though the night was cold, I managed to catch some sleep; I was exhausted. The following morning followed the same routine as the day before, but things were a bit easier as we had gotten used to the schedule. On this day, we were taught how to match and the different styles of matching in our Mwamba category. That afternoon, those of us who were tired took the opportunity to sleep. Dinner preparations begun at 1700 hrs, on the menu was Ugali and scrambled eggs. Three blows of a whistle and it was the dawn of the most important day, the Founders Day, this was the day when our founder Lord Baden Powel and his wife were born and the main reason for the camp. This day took place on 22nd February each year.

We took our breakfast very early compared to other days at around 06:55 am, dressed up quickly, and at 07:15 we all gathered at the bus ready to depart to Paxtu which was the home of Baden Powel. Upon the arrival of the Governor of Nyeri, Hon. Mutahi Kahiga we were to match 500 meters to where Baden Powel was buried. We went up to the gravesite, and we were allowed to see it. The event took around 3 hrs. That evening, the camp was abuzz with conversations of the days we had been there, being the last evening before heading to the academy, the meal was ready by 1900 hrs. Soon after washing up, we put on our warm clothes and went to sit at the campfire.

Our laughter broke the silence of the night as we told stories and did fun activities as we edged the night away, we hit the sack at almost 1:00 am. The camp was fruitful, and we learnt many things such as teamwork, anger management, collaboration and had fun while at it. By 05:30 am we were up and ready for the jog, we had only slept a few hours but the thought of travelling back to the comforts of the academy proved the one incentive we needed to take on the challenge. After breakfast, we all waited eagerly as well as the investment of some of our colleagues. A quick unhitching of our tents and packing into the bus and off we went for our exams and wards of the badges. One key thing I learned is that a command is bigger than the one giving out the command, and when you are asked to do something do it without complaining.

It was such a unique opportunity.